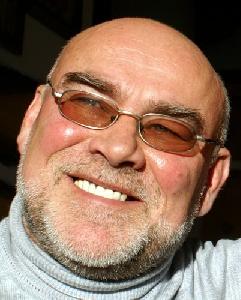 Wiktor Stachwiuk (Podlachian: Viktor Stachvijuk; Belarusian: Віктар Стахвюк) was born on June 1, 1948, in the village of Trystianka in the Białystok region, into a family of peasants, Vładimir and Anna. He completed the Belarusian-language secondary school in Bielsk, a technical high school in Białystok, where he mastered telecommunications, and the Belarusian philology in Warsaw (1973). Since 2000 he has worked with the Białystok-based Radio Racyja, which he co-founded.

During his youth and adult years he was busy with social, cultural, and political matters: he dealt with making films by university students; founded a club of divers and organized their trips to Italy, Greece, Spain, Corsica, and Croatia; held individual and joint exhibitions of his paintings; worked as secretary of the Belarusian Social and Cultural Association and coordinator of the Belarusian Democratic Union in Poland; organized Belarusian election committees. In 1990s, when he worked as a private entrepreneur, he registered, in Seoul, the first Belarusian sea vessel under the white-red-white flag.

and Jan Maksymiuk.
Reprints and re-use of Svoja.org content permitted only with a credit to the source.